Hobbling Of The Foot Soldier 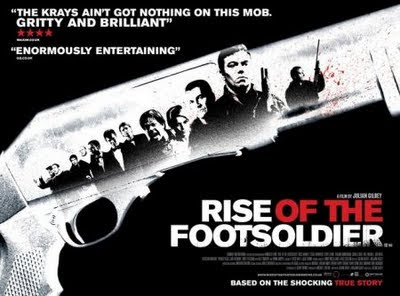 It might seem churlish to question the narrative voice in what is after all only another brutal, grimey British gangster movie (Film Gris?), but hey I'm a writer and such things niggle me.

The movie fuses the autobiography of Carlton Leach, erstwhile football hooligan, club bouncer, drug dealer and gangster, with a portrayal of a true crime where three drug dealers who were our Carl's mates, are executed in their land rover in remote rural Essex. The movie starts off from Carlton's point of view, his rise through the ranks from terrace hoolie all the way up to serious player in the Essex underworld. But two-thirds of the way in, his voice and pov is marginalised, in favour of the three guys who eventually decorate the car's interior upholstery with their grey matter. One of these characters only appears in the film half-way through, since up until then he has been in prison. A second is shoehorned (crowbarred?) even later and yet we are sidetracked off into his story as the perspective becomes multiple, representing each of them together and apart, while Carlton remains on the fringes, bound by loyalty and friendship, but distancing himself from their drug-fuelled self-destructive path.

And even though I regard myself as a reasonably sophisticated movie watcher, this shift didn't work for me. Throughout the film are almost subliminal images of 'what if' scenarios, of members of Carlton's family and Carlton himself facing execution if he undertook a certain course of action. This makes the whole film seem to pivot entirely around his fate. And yet he backs off from action of any kind in the last third of the film and these scenarios really ought to apply to the three who did end up dead. Maybe it's supposed to embody the switch from the individual to the gang, but it veers the film wholly over from where it started into something else and ultimately serves neither.

I haven't read Leach's book "Muscle", but assume it is a straight-forward biographical narrative of events and influences in his life. For a scriptwriter to try and graft this on to a multi-perspective take on a hotly disputed crime open to many different theories as to what actually happened, suggests to me a failure of craft. It possibly could work in a book, to switch pov so radically, but in a film I think it exposes the diversity of its sources and how poorly spliced together they were.

The thing is that we actually already have films aplenty dealing with both of these subjects. "Cass" a book and film by Cass Pennant another West Ham hooligan, replicates a life very similar to that of Leach's and contains some of the same set piece events that both were present at. "Essex Boys" is a film devoted to the entire story that ends up with the land rover shootings.

And here I think, is the dispiriting truth that emerges out of all of this. There are probably more films about this ten-a-penny criminal gang than there were made about the Krays. I can count 5, yes 5, films portraying the hooligan battles between West Ham's "Inter City Firm" and Millwall's "Treatment" - "Green Street 1 & 2", "Football Factory" "Rise Of The Foot Soldier", "Cass", not to mention two fictioonalised West Hams in "ID" (Shadwell FC) and "The Firm" (The Inter-City Crew). In this parochial, navel-gazing, dire Danny-Dyered world, of glorified violence and (man-on-man) torture porn, is it any wonder that the British film industry can't revive its fortunes?

But hell I'm as guilty as the next guy of a voyeuristic pleasure in these types of movies. I've even published a novel set around a gangster premise, but I would hope that mine attempts to show the other side of this gangsterism; not the consequences for the geezer slumped in a car with a hole in his head, but for those others in his orbit - since my novel is from the view of his wife, or ex-wife as she is on one level and under the threat of it being extended to a second, permanent one. It's a novel about pain, exclusion and self-deception. It's a book about terror, but does not dwell on the actual violence that underpins it. I trust it doesn't glorify anything about the lifestyle, but explores the contours of the husks of the people consumed by it.

"So you are either with them or you are against them. Thus states the primordial credo of the thick-set men with non-surgical scars. Handed down to us priestesses with porcelain skin and fine features, to tend the everlasting flame. Dimly aware that our Prometheus had nicked and then ring-fenced it with us human shields in the first place. But Jesus, we weren’t vestal virgins, we knew why we had been chosen. I mean they weren’t going to fuck women with hips as wide as those of their mothers now were they? No, and for our part we knew that our temple was erected upon the gains of pillage, tythe, tribute and forfeiture. Tipped to the wink by the sudden swelling of numbers in our houses, of men slightly too large for their clothes. The tumescence of their cars parked in the drive. The phone ringing off the hook. All that would clue us in. But we were shrouded from the ways of their world once they left our midst. Aware of where the riches were emanating, but not the details. Whose spoils became our bejewelling. We perceived what our high priests of crime did for a living, yet we couldn’t pen a job description".
From " A,B&E"