As well as contributing two short stories to the anthology, I wrote the introduction to Pop Fiction - Stories Inspired By Songs In it I linked musicians who had been inspired by books and certain novelists and poets who set their words to music. 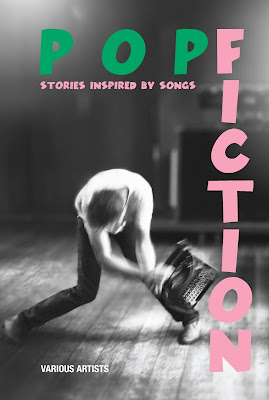 I wanted to extend this and give you a top ten of songs which either quote famous lines from fiction or the titles of books. many of them come from the post-punk new wave era, both from Britain and America.
1) "Killing An Arab" - The CureRobert Smith allegedly penned the song while studying the book for his French O-Level. I owe a similar debt to Albert Camus as "L'Etranger" and "La Peste" delivered me into reading when I was a late starter. Dunno what Meursault would have made of Smith's make up and goth clobber mind. Actually, he probably wouldn't care would he?
2) "Heart Of Darkness" - Pere Ubu The band took their name from Alfred Jarry's great precursor to the Theatre of the Absurd in his three Ubu plays. The song shares the title of Joseph Conrad's great work and which has inspired so much art including "Apocalypse Now" and being name checked by TS Eliot in the epigraph to "The Hollow Men". This song oozes and bleeds with paranoia and tension which is so apt.
3) "Venus In Furs" - Velvet UndergroundHardly surprising that Lou Reed might be attracted to a work written by the man who gave his name to the word 'masochism' - Leopold von Sacher-Masoch. The first video is so chaotic you can't hear the lyrics, but gives a sense of the New York Factory scene. The second video gives the song more of an airing.
4) "Bug Powder Dust" - Bomb The BassTim Simenon's homage to William Burroughs and "Naked Lunch" sampling from the 'unfilmmable' film of the same name. The song is also a cut-up in its own way as it references Burroughs work while also holding an imaginary conversation/interview with him.
5) "We Live As We Dream Alone" - Gang of FourBack to Conrad's "Heart Of Darkness" and a quote directly from it that sums up the isolation and thwarted dreams of the novel's main protagonists.
6) "Song From Under The Floorboards" - MagazineHoward Devoto lead singer of Magazine may claim the title of most literary song lyricist. This song references Dostoevsky's "Notes From The Underground" in its stunning opening lines. In another song he namechecks Raskolnikov from "Crime And Punishment".
7) "Jack and Neal/ California Here I Come" - Tom WaitsHis tribute to Kerouac's "On The Road". A book that did little for me, but then I can't drive, have no particular yen to cross my tiny island of Britain let alone the continent of America. I'll settle more for Camus' alienation, even if we don't get the sun on our heads.
8) "The Stranger" - TuxedomoonAnother adolescent namecheck for Camus' classic, bearing out my theory that in the UK, any teenage boy who dares pick up a book to help articulate his feelings, is likely to come by one or all of "L'Etranger", "The Magus" and "Catcher In The Rye". Two of these 3 are very fine books.
9) "Death And Night And Blood (Yukio)" - The StranglersThe Stranglers overtly acknowledge Yukio Mishima's inspiration by including him in the title. "Death and night and blood" is a quote from the semi-autobiographical "Confessions of a Mask", describing his "heart's leaning toward".
10) "Xanadu" - RushThere's a bit of the Spinal Tap portentousness about this, but once they lyrics kick in they keep pretty close to Coleridge's "Kubla Khan" which of course itself rather infamously was penned while under the influence of narcotics, how very rock and roll - and of course that he was disturbed by a visitor and forgot the last lines as he had originally envisioned them and had to settle for a finale while no longer under the inspiration of the opiate muse.
11) Bonus Track "Lorca's Novena" - The PoguesNot actually referencing a work, but the fate of Spanish poet Lorca who was killed by Franco's Fascists. This song underlines Shane Macgowan's own claims to be a poet of stature.