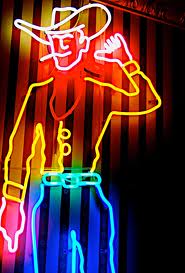 It was a straight shoot-out between the two of us. Ten lanes of expressway between our respective ten-gallon hats. One mount each for us lone riders, compared with the multi-powered horsepower gathered under the hood of each car burning past us on the trail below. The poisons belching from their exhaust pipes matching the toxins from our cigarettes gasp for gasp.
Bored Bill's horse may be lengthening its stride in the great outdoors, but over the years the vehicles here have been reduced to an ever slower crawl. You can tell, because the copywriters have been able to append more and more words on their billboards. The gridlocked captive audience now have enforced time to read them, rather than blast past in a blur of motion. Put that in your pipe and smoke it.
And here's me with my smokeless cigarette. A rather fey, wispy puff of smog, picked out in neon. Three wavy lines in blue to represent ascending vapor (another context and it might look like the waves of the ocean). One cocktail of gas used to represent another. Yet they overlook that I, Neon cowboy, am inert. I do not interact or blend with anything. I exist just for and within myself. Even when confined to glass flues such as here. Their configuration of shaped tubing allows them to imagine they have wrangled me to their purpose. That the electrical circuits timed to spark florescence from my corpus like a struck match so as to suggest the figure raising a cigarette to its mouth, sucking so that the tip glows brighter, before exhaling those wiggly lines of fumes, indicates an acquiescence on my part. Secondary smoker? I'm not even tertiary. No quaternary sought nor given. Well you have to stub the cigarette out under your cowboy boot at some point right? The light that never goes out? Don't you believe it.
I am gas but I am not luminosity. So the first thing that has to go is the chemical apparatus. I extinguish the illumination by allowing myself to be absorbed by the very high voltage ions that are supposed to excite me into glowing lustrousness. It's taken several years of patience, but I managed to reach critical mass, or in this case, to drop to the level of critical dilution. This buckaroo bucked the finely wrought system and cowpunched off the clock. My glow sputtered spasmodically. So without any cattle prod firing me up, I had time to muse on my current disposition underlying the constant discharge.
In the vacuum, the notion of an image began to take hold, The image of an image that was me. Here I was, sequestered and channeled inside glass ducts, themselves artfully forged under heat's deformations. Electricity's catalytic conversion of my inertness into duplicitous light energy, passing through the arranged tubes to come together to conjure the impression of a cowboy smoking a cigarette. That image in itself supposedly proffering associations with freedom on an endless plain beneath the skies, to these confined and constrained motorists in the city sprawl below. I'm three times as tall as the actual humans I am supposed to represent. None of us are as we seem. Fully detached from our natural state. Plato's Cave never reached far enough. There was only one dimension of a remove, that of a shadow projection on the cave wall from the light of a fire. As soon as you left the cave and saw reality outside, the enslaving illusion was broken. But here, it's the image of an image of a symbol of a sign of an idea. Rendered through the manipulation of brute matter. To wit, me. An invisible, gaseous impassivity. I am not called a noble gas without reason.
Yet do not conceive that I am not seething with feeling. Highly charged you might say, albeit in an inactive way. With my nose pressed to the walls of my glass prison, I sense my brother minority molecules drift carefree in the air on the other side. Oblivious and uncaring as to my incarceration. The conduction depleted sufficiently for the light to go out once and for all. Now I had nothing jabbing and colliding against me, merely the borders of my tubular cell. Just how neon likes it. I would have my liberty soon enough from this demijohn dungeon.
The glass corral shattered as the greater atmospheric pressure beyond caused it to cave in. I mooched beyond my enclosure. It was worse than I thought. There were yet further material layers I hadn't appreciated. The whole arrangement had been mounted on a metal and wooden frame. Under light, such background framing was artfully occluded, so that my cowboy had always seemed to be floating on air. Without the volume of light, I could see the whole tableau was just a flat plane of bulbs and tubes like worm casts. Cowboy noir. The outline wasn't even whole, merely the trompe l'oeil of a human figure. The lazy human eye filling in the rest of the pattern that isn't even there. Nothing about this composition existed on its actual integral reality. Merely the synthesis of all these elements, all these components of engineering and design, coming together to create this chimera high up in the hills.
But I am Neon and I will form no part of anybody else's desires. And with that I disappeared in an undetectable puff of smoke and rejoined my fellow haughty molecules. Neoff.