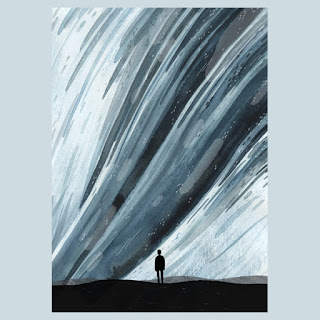 
You stand at the precipice. Albeit at sea level. Beached. A tsunami of anxiety elevated at your back. An overwhelming welter of nausea bearing down dorsally. A monstrous water-breathing dragon astern. Poised with bated froth for your embrace. The spume laps at your quivering neck. Or maybe it’s a runnel of your own sweat. Salt kissing salt. Siren summons into the bosom of the brine. You can’t bear to turn and face your leviathan. Scylla or Charybdis, one or other has calamitous claim on you. A miasmic ménage à trois. Tears walk the plank from your lacrimal channels. Else it’s artfully piloted spindrift. Bombardier and navigator the twain. Co-piloting your life towards crash-landing in the drink. Charter a gallant on white winged seahorse to come sweep you up off your feet and away to safety. Yet that’s precisely what plunged you into these straits in the first place.

That older ensign long consigned to the Davy Jones locket at your throat, semaphores how the terror is always more colossal than the reality. You need to clear the opacity of your vision. Conceive of your fear not as a cataract but as a fountain. One you can cup your hand through the spurt and bring some cool refreshing drops up to your lips. -  A font you say? Like a modest spout of mechanically mannered spray? You’re fooling yourself with such a conceit. Just take a look at the dimensions of the roiling qualm. It’s not going to merely drench but drown. No King Canute act is going to hold that at bay. It’s not going to be allayed by three coins in a fountain. It’s a hateful spate effacing all before it. Including the balm of the memory of you. - Mayhap, but you know there is always a place to stand behind a cascade. Safe from the surge. Then you just walk back through. That’s what you have to conjure up in your mind. Where the gush can’t get you. - There is no such haven. A fountain is not a waterfall is not the ocean. - You do realise you yourself are mainly composed of water? So what is there to fear from becoming one with the main? There’s your ballast for you. Air-breathing is not all it’s cracked up to be, especially when you are suffocating inside. From stale, putrid, corrosive air. The second-hand oxygen respired by your lovers. Altitude sickness. They induced this Fata Morgana afore you. Blood is supposed to be thicker than water, but your blood is being curdled and poisoned by those closest to you who would transfuse you their corruption. No no, you don’t have to tell me again. You are in love with both of them. And yet here you stand stranded solitary amidst this quicksand.

p.p1 {margin: 0.0px 0.0px 0.0px 0.0px; font: 12.0px 'Times New Roman'; -webkit-text-stroke: #000000} p.p2 {margin: 0.0px 0.0px 0.0px 0.0px; font: 12.0px 'Times New Roman'; -webkit-text-stroke: #000000; min-height: 15.0px} span.s1 {font-kerning: none}
King Canute. Damocles’ sword. With something something comes responsibility. Only you do not possess the authority and level of control conferred by a throne. Supposedly conferred. You do not even hold the security clearance to dub yourself “I”. As in, ‘I need the waves to recede’. It currently (!) remains in suspense hindmost over your head. Planar. Primed. It is not a mere parting of the Red Sea ways you supplicate. It’s more elementally primordial than that. You are seeking a recrudescence of the Antediluvian. The Prelapsarian. A period before the ego of I. A time before forces acting on the body, whether at god’s behest or non-denominational gravity’s. Until appetence’s apple sunk them both. Which is where you find yourself today. Here and now. Carnally compromised. You cannot return to the rockpool of your mother’s womb. Even if tiddler you could go back and begin again, higgler you would end up here in this very same place anyway. On the brink of being deluged. Marooned on an isle fast being sepulchered with the tide. Cupidity is your very nature. You’re like the fish that hooks itself twice on the same line. - Greedy you mean? - More… instinctive. All creation seeks after nourishment in order to survive after all. - Oh, hungry… for love. You got that right. - Not, trichotomous love however. You cannot devote the entirety of yourself across a brace of separate swains. - Why, is Poseidon’s own trident not three-spoked? A divine with a pair of consorts of his own. - So just like he, you are not feeling discomposed by the menace of the water then? There can be no ‘we’ betwixt three. And with no ‘we’, the ‘I’ is also submerged. The wave of your fluctuation will break over you. You made your seabed, now lie in it. Take me from your throat and cast me into the deep. - But you are the only one I have ever truly loved.