Two Up, Two Down - Friday Flash 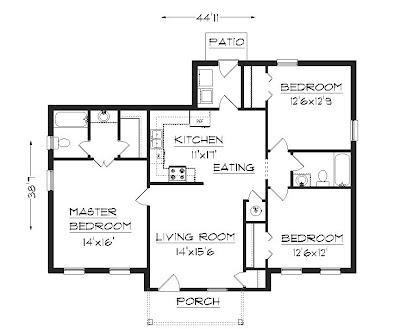 It was our dream house. White picket fence, hydrangea and bougainvillea, understated unassailability and overblown fecundity, the lot.

Interiors designed by ourselves. Hand drawn plans, lofty elevations with the highest of intentions. Carving out our own shared space. Shutting the door on the world, just to inhabit one another.

Our abode, a place of constancy, of abiding bricks and mortar solidity. A uniquely private realm in which to abide by its own internal rhythms if not its house rules. Those windows kissed by the sun in the morning. The walls limned with shadows from the electric lights. Our own projections. A place to bide time, until you can abide one another no longer. Once ineffable percolations of each have seeped into tiny cavities in the masonry. Blisters of self bubble the wallpaper and welt the paintwork. The very fabric of the house sweats, colonisation by odour cologne boy and attar girl. Suffused with one another like blocked up pores, we seek to pop one another like blackheads.

A dwelling, a place to tarry and linger. A place to be led astray into, boxed in and ensnared. Instead of dwelling within a condition of happiness, a place to dwell on morbid thoughts and recollections. She's gone now, vacated this space. Leaving me free to roam its walls. To restore and reconcile it, having been divorced from its design through hosting our conflict. For other than the one I may be located in, all rooms are now spare.

I stand in the Parlour. With no one to talk to. I've wearied of shouting at events unfurling themselves on the TV to make myself heard. It can't be deemed a Lounge, since I find I cannot relax here. The sofa dwarves me in its spongy embrace. Nor does it merit the name of a Reception, for though I have removed the rug where we liked to fuck in front of a roaring fire, the bare floorboards only accentuate my lone tread. The fire too is playing up, suggesting sympathies lying with her as it draws not through the chimney, rather choking the heart of the room with its fumes. Her geegaws, knicknacks and trinkets which were meant to be conversation pieces, are nothing of the sort of course since they only silently brook her side of the argument. So I swept them all from sills and mantle, into a cardboard box and evicted them. The piano still stands there, even though I cannot play a note. Removal logistics have defeated me, since it is too outsized to squeeze back through the door. I have at least shut both its lids, so that its works do not mock me with their simulation of the idle bars of my typewriter keys.

The kitchen was never really my province. Its units being fairly neutral, it was the crockery and its ilk that were partisan. They have departed with the figurines. I don't utilise the oven, settling for take-aways, but the washer-dryer presents me no such qualms, though opening its maw to receive its first male-only minotaur's offering, revealed a part undigested former oblation of one of her popsocks. In actuality, I have used the cooker once. The gas hob to ignite the sock and watch it shrivel and burn in the formerly stainless steel sink.

Up the stairs and one is confronted by the possibilities for take off lying behind each closed door verging the landing. But it struck me that the doors could either admit inward, ushering you into the room, or as you leaned forward to open them, they swung out and demanded you give ground before crossing their hallowed threshold. And if positioned within, similar dynamics. The door that opened as if trying to press you back inside the room; or which swung outwards with you hanging on to the handle almost being dragged out of it. We had mounted all these doors ourselves, yet I had been oblivious to the unspoken echelons implied by each's loaded singularity.

Needless to say, the Master Bedroom was nothing of the sort, opening inwardly and seeking to hold me there. A Boudoir, her word, means a place to sulk, how fitting! I had tried aerosols, burning incense and leaving the windows open all day, in order to purge the funk of her. The linen had been disposed of, but her sex still ruffled the room. I had covered the mirrors with cloths, until a buddy pointed out this is how Jews mark mourning. Then I contented myself with smashing them with a hammer, seven years bad luck being a small price to pay, even if they're cumulative sentences. I simply abandoned the clothes marooned within the wardrobes festooned with broken glass.

The Bathroom was an unavoidably wretched strait. Both the medicine cabinet and shower door had been her last direct communiqués with me, but I had managed to wipe clean the hateful lipstick messages, until all that remained were carmine smears. Enhancing the room's locus of blood and dirt and skin. A labyrinth of hidden plumbing running down beneath plugholes and cisterns, with their curves and U-bends for trapping our run offs and effluvia. For all my rubber-gloved bleaching sorties, how she must still reside there, little tiny shards and spoors of hair, nails and other off-cuts. Totems and clippings of her unsympathetic magic, cursing me from beneath the ruts and gouges in the linoleum. She persecutes me from within the pipes, blow darting me to a slow ruin.

So it's hardly surprising that I have retreated to the sanctuary of my Study. I've put a camp bed down, hang my clothes from the curtain tracks and it's here I partake of my meals too. For this was ever the one single room stamped entirely with my cast. Though somehow her poisonous essence even manages to slip under the door and waft itself within these precious walls. I only returned to writing by a typewriter, because every time I switched my computer monitor on, there in lipstick font would appear the message "How can you live with yourself?" No matter what I did to try and change my screensaver, always it would return afresh to taunt me. Somehow she had hard wired it into my system, and I didn't even know she could work a computer! So I junked that, the only possession of mine to disappear along with all of hers. Yet my own words have never since flowed beneath my fingers. The emotional integrity of my room, the refuge for my thoughts, had somehow been penetrated and my prowess was bleeding out.
It wasn't those particular words themselves that were corroding me. It was the groundwork she'd put in underlying them. When she had re-consulted our original ground-plans for the house and overwritten the word 'Study' in my angular uncial, with the word 'Nursery' and appended a heart above the 'u'.
*
This may have been prompted by a weekend of spring cleaning & decolonising the children's annexation of our living space...